DocuDoka Film & Discussion Night: Is The Cove A Whale of A Tale?
45
portfolio_page-template-default,single,single-portfolio_page,postid-45,bridge-core-2.3.3,ajax_fade,page_not_loaded,,qode-title-hidden,qode_grid_1300,footer_responsive_adv,qode-content-sidebar-responsive,qode-child-theme-ver-1.0.0,qode-theme-ver-21.9,qode-theme-bridge,wpb-js-composer js-comp-ver-6.2.0,vc_responsive 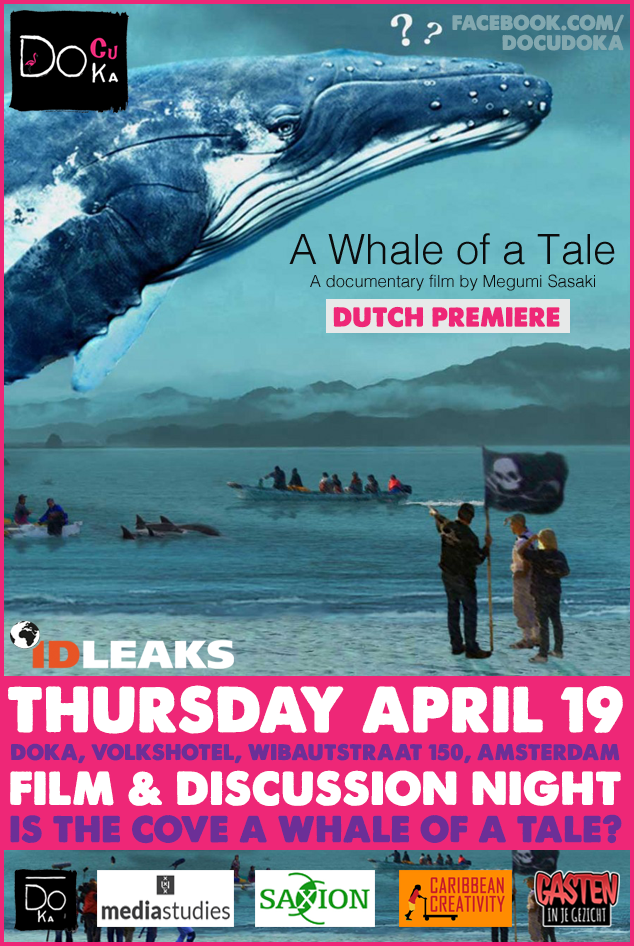 On Thursday April 19, DocuDoka, in collaboration with the Expertise Centre Humanitarian Communication, organizes a film and discussion night on Taiji’s dolphin hunting practices, made infamous worldwide by the Oscar-winning documentary The Cove (2009). The night in creative bar Doka will start with the exclusive Dutch premiere of A Whale of a Tale (2017), a new documentary by Japanese filmmaker Megumi Sasaki on the conflicting views on dolphin hunting between Western environmental activists, local Japanese fishermen, and everybody in between (including filmmakers). Following the screening, there will be an interactive discussion on the issue of dolphin hunting and the role of tradition, culture, activism and filmmaking within this issue with the director, animal rights activist Peter Janssen, two scholars and the audience.

The evening will kick off with the screening of A Whale of a Tale, a response to The Cove, the controversial Oscar-winning documentary on the dolphin hunt in Taiji, Japan. Among the influx of media and activists there in the aftermath of the controversy surrounding The Cove’s release was Japan-born, New York-based filmmaker Megumi Sasaki on the lookout for unheard voices: ‘I didn’t care whether the hunt itself was good or evil but felt that minority opinions – those of Taiji’s fishermen and other inhabitants – were being ignored.’ Her findings in A Whale of a Tale aim to paint a balanced picture of a complex issue with heated arguments on every side, as her film weighs up the cultural, ethical, environmental, economic and medical impacts of hunting dolphins in Taiji. The screening of A Whale of a Tale at DocuDoka marks the Dutch premiere of the film.

After the screening, there will be an interactive discussion with three panelists. While the director will join us via Skype, Peter Janssen, Olga Sooudi and Maarten Reesink will be present to take part in the discussion as well. Peter Janssen is an animal rights activist better known as the Vegan Streaker for appearing in crowded settings with little clothing to ask attention for animal welfare. Last year he was briefly imprisoned in Japan for disturbing a dolphin show in the Adventure World Park in Shirahama by jumping in the water and holding up a sign against the dolphin slaughter in Taiji. Sooudi is Assistant Professor in Anthropology at the University of Amsterdam / Universiteit van Amsterdam as well as a member of the International Institute for Asian Studies (IIAS). Reesink is Senior Lecturer in Media Studies at the University of Amsterdam / Universiteit van Amsterdamand an expert in Animal Studies, the research field that focuses on the representation and meaning of animals in popular culture.

Tickets for this edition of DocuDoka are available online for €10 at http://bit.ly/docudoka10-awhaleofatale (€7,50 for students when showing their student ID at the door). If not already sold-out in pre-sale, tickets can be bought at the door as well. As seating is limited, advance ticketing is advised.